Thanks to the calendar, the changing of the [art] guard happened late this month with the first Friday and the first Saturday falling on March 7 and 8. Nevertheless there is a lot of exceptional work on show all over the Hudson Valley to welcome spring and the rebirth of the year. Many of these are group exhibitions and, therefore, showcasing a huge variety of local artists and the plethora of styles and art practices currently happening in the area.

Also happening are some particularly interesting solo artist exhibitions that must not be missed. These include Carl Van Brunt’s gorgeous digital confections in Beacon, and Mary Reid Kelley’s witting “Working Objects and Videos” at SUNY’s Samuel Dorsky Museum in New Paltz — more on those below. The following are some highlights from towns around the valley.

The Tivoli Artists’ Gallery at 60 Broadway in Tivoli has an intriguing show happening from March 7 through Sunday, March 30. It is entitled “Awakening” and is a mix of artwork and essay. Participating artists include: Karen Caton, Susan Fowler-​​Gallagher, Gilbert Ríos, Roxy Johnson, and Karl Volk. The gallery is open Fridays: 5 – 9, Saturdays: 1 – 9 and Sundays: 1 – 5.

Crossing the river to Kingston, The Kingston Museum of Contemporary Art (KMOCA) plays host to a group of MFA students from SUNY New Paltz in a show with the eloquent title of “Ardent Rift”, while the Uptown Gallery at 296 Wall St. (near the corner of John), features work by artist Roberta Sickler. The Uptown Gallery is also the HQ for the Kingston Festival of the Arts, and owner/​opera singer Kerry Henderson and resident curator Gloria Waslyn host monthly culinary salons that are becoming a feature of Kingston (and beyond) social life.

In Woodstock, there are two major group shows for your dilection: the Woodstock Artists Association Museum’s (WAAM) March show juried by Wayne Lempka, Art Collections Manager at the Dorsky Museum, and the Woodstock Byrdcliffe Guild’s annual member show. The show at WAAM is primarily abstract pieces, and Lempka’s sensibility comes across in the relatively gentle tones of the works. Noteworthy is Michael Esposito’s “Untitled,” an extraordinary piece reminiscent of micro-​​organisms, or possibly a hive, blown up to giant proportions. Also at WAAM is a small works group show in the Founder’s Gallery, a solo show of abstract drawings entitled, “It’s Complicated,” by Harriet Liviathinos and, in the Towbin Wing: “Her Many Facets:  Portrayals of Women from the Permanent Collection” through June 8. With the exception of the latter, all shows run through April 6th.

The Woodstock Byrdcliffe Guild’s member’s show in the Kleinert/​James Arts Center is entitled “Ruckus” suggesting that the curators, Portia Munson and Katherine Umsted, were expecting the kind of headlong clashing of styles and genres one expects from a member’s show. However, while it doesn’t feel like a Ruckus, there is dynamism in the show thanks to the thoughtful design of the curators. 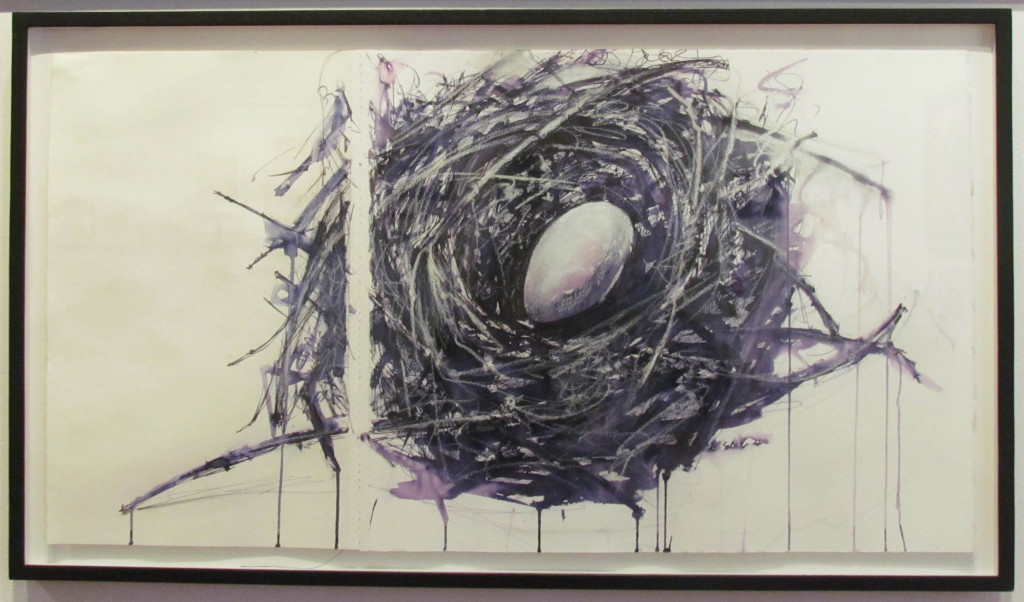 The show does span the gambit of styles from abstracts like Calvin Grim’s exuberant “Cleaning Out the Stories” and Sandra Nystrom’s “Transitions” — the latter a halo of faceted gold tones — to Carol March’s sumptuous digital photograph, “Birthday Bouquet’s” (for which she won the best-​​in-​​show award) to Margaret de Soliel’s charming ink and pastel “Nest with Egg,” and our own Roll contributor Claire Lambe’s remarkable and expressive portrait entitled “Michael” (of artist Michael Esposito, mentioned above). Gallery hours are Friday through Sunday, 12:00 –6:00 pm, or by appointment on Tuesday through Thursday, 10:00 am – 5:00 pm. 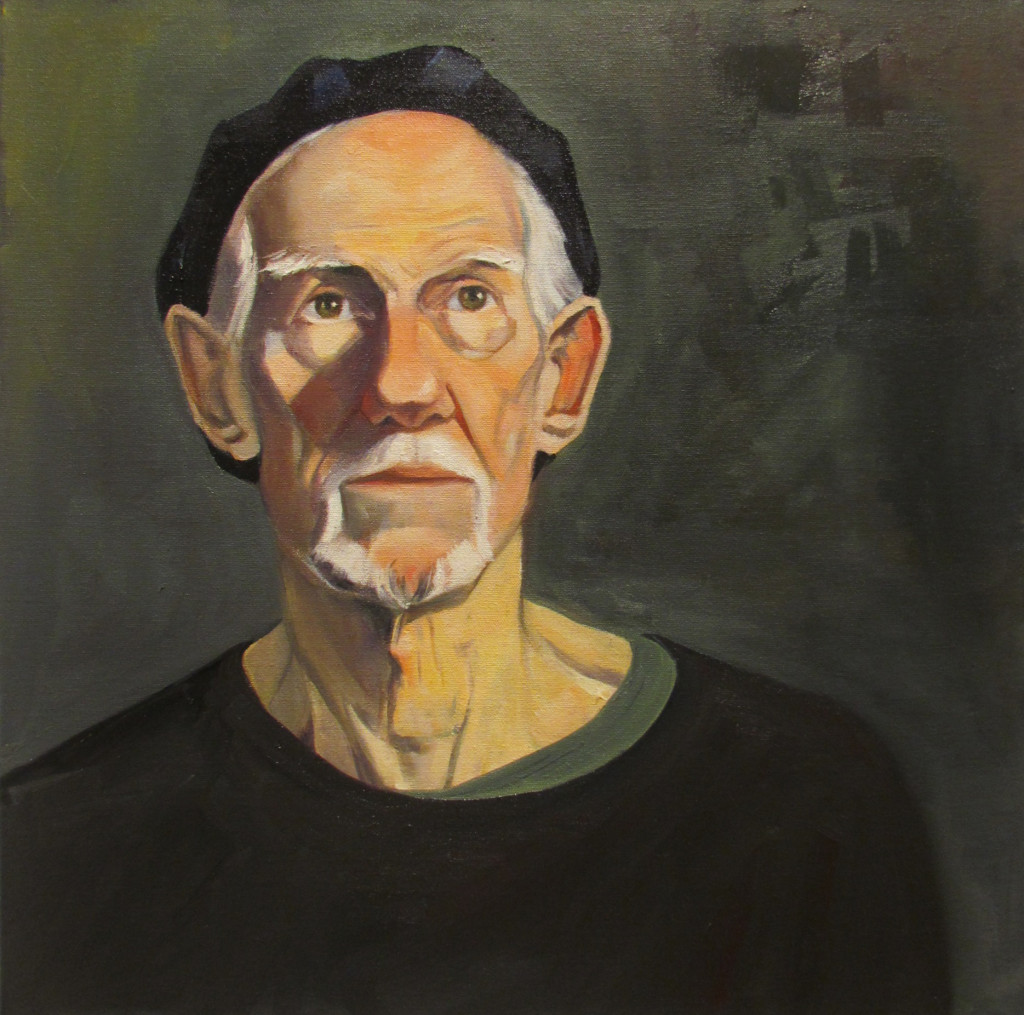 Both Lambe and de Soleil are also among Lenny Kislin’s featured artists for March with, respectively, Lambe at New World Home Cooking on Route 212 in Saugerties, showing a series of portraits, or simply “Heads” as she titled the New World show, and de Soleil showing more of her fine pastel studies of stones in Oriole 9. Both exhibitions run through March 31. Oriole 9 is open every day until 4:30 pm, and New World opens at 4:30 pm except on Tuesdays and Wednesdays — Sundays it is open for breakfast and lunch also. 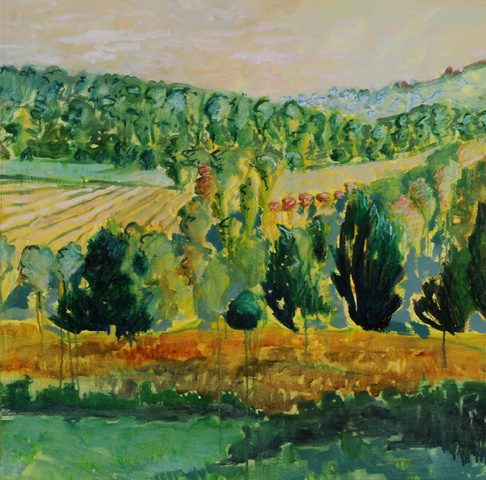 The Woodstock Framing Gallery (WFG) show, “A View of Woodstock,” features new work by Anne Crowley, Cristeen Gamet, Maria Katzman, and Rob Wade. Robert Wade’s small pastel, “Snow Sheep Purple,” is a delight. Crowley’s last outing at the WFG was a suite of zesty cityscapes: the oranges and golds of Manhattan nights. In this show she returns to the pastoral but the work is no less zesty and energetic for that. The show opens Saturday March 15 with an artist’s reception from 5 – 7 pm, and continues through May 19. Hours are: Monday – Saturday 11 – 5; Wednesday closed and Sunday by advance appointment only. 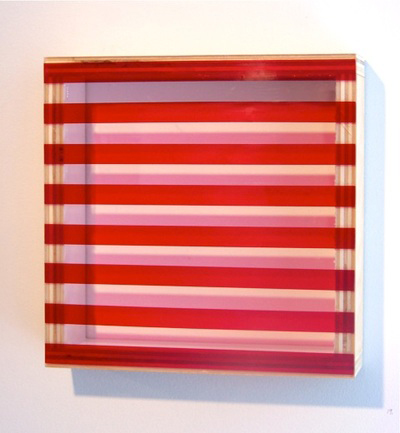 Robert Petersen, “Stepping Over a Shadow”

In Saugerties at 81 Partition St, the Imogen Holloway Gallery winter group show, “From the Vault,” continues through Sunday, March 16, so if you hurry you can catch it. It highlights the work of seventeen artists including Henrietta Mantooth, Heather Hutchison, and Robert Petersen. Following this and running from March 20 through April 27 is an exhibition of new works by Pier Wright and Mandolyn Wilson Rosen. The common concern between these artists is one of space; specifically cramped, crowded and compressed space. Mark your calendar for the artists’ reception Friday, April 4, 6 – 9 pm. Winter hours: Saturday & Sunday 12 – 5 and any time by appointment. 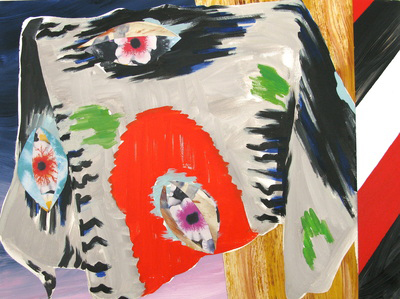 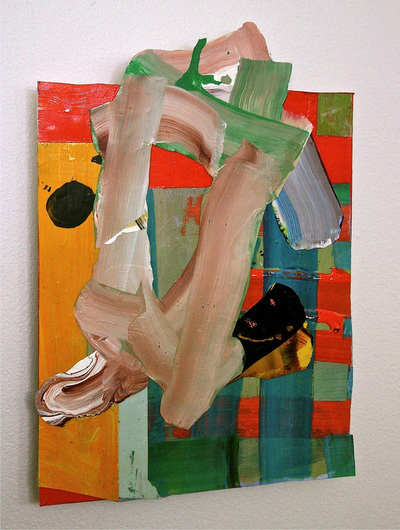 Rosendale’s Roos Arts at 449 Main St. brings together a father and daughter in a show aptly entitled, “Relative Objects.” The show consists of paintings by Dan Green and sculptural works by Galen Green, and will be on view from March 8 to April 12. This show, the first time the artists have shown together, presents an opportunity to juxtapose their work, while examining the interstices of influence and aesthetic. Dan Green is renowned in the world of comic book illustration for his long tenure as an inker and penciller for Marvel and DC comics. The work in this show will show another side of him – it is a series of paintings inspired by his daughter Galen’s childhood toys, and his most recent works incorporate photographic imagery from his childhood. 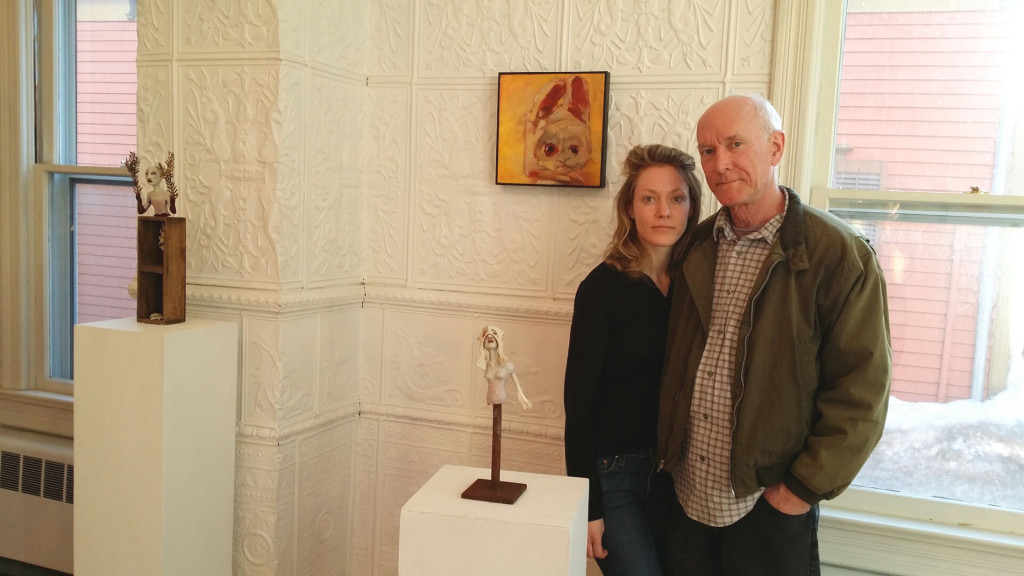 Galen and Dan Green with their artwork in the Roos Arts exhibition space.

Ms. Green, a graduate of Rhode Island School of Design, is currently working on large-​​scale crocheted pieces, including life-​​sized characters from the classic Tod Browning movie, “Freaks.” Gallery hours are Thursday through Saturday from 1:30 to 5:30 and by appointment.

Next stop: Beacon and the Theo Ganz Studio, 149 Main St, and Carl van Brunt’s solo show “Walking the Changes.” The exhibition features two new installations of projected digital paintings by Carl Van Brunt. Having abandoned acrylics for pixels over 30 years ago, Van Brunt now has an impressive record of digital art work that has been shown extensively throughout the Hudson Valley. His chief influences are Jazz and Buddhism and both are evident in his work: on the one hand, the energy and rhythm in the images, and on the other, the attention to symbol, pattern, and sumptuous color. The title is a fusion of ideas from both of these loves. The show runs through April 6; gallery hours are Friday — Sunday 12 – 5 and by appointment. 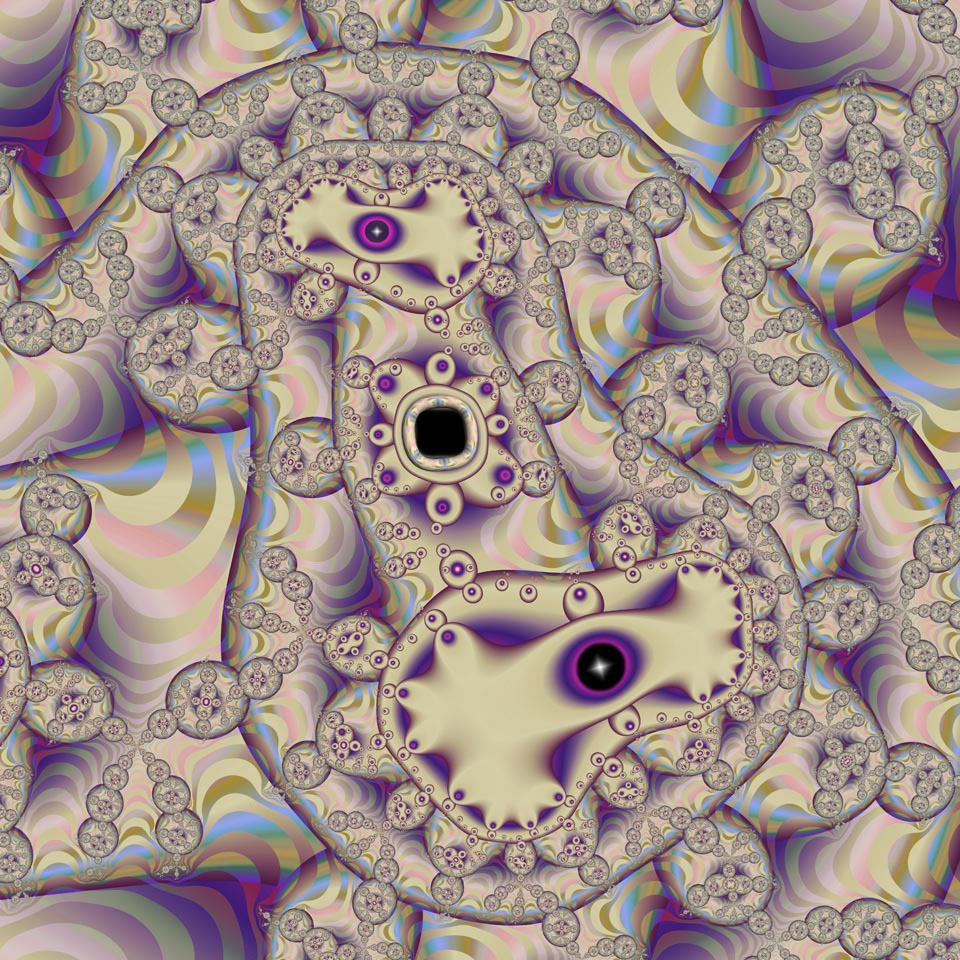 At the Frances Lehman Loeb Art Center at Vassar College, 124 Raymond Ave in Poughkeepsie, Malian photographer Malik Sidibé’s exhibition continues through March 30 — go Here for our recent extended coverage of that exhibition. Also, do mark your calendars for what promises to be a very exciting exhibition coming up at the Lehman Loeb consisting of two site-​​specific, monumental fabric installations by artist Todd Knopke entitled “Deluge.” This work will be on display March 28-​​July 20 and the exhibition opens with an event featuring a conversation between the artist and the curator on March 28 at 5:30 pm. 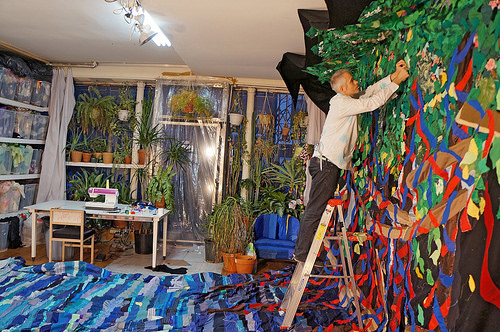 Todd Knoff working on his installation

And last but not least, at the Dorsky Museum at SUNY New Paltz, the Eugene Speicher retrospective, “Along His Own Lines,” continues in the Morgan Anderson, Howard Greenberg Family, and Corridor Galleries — go Here for our in depth-​​coverage of that show. Then for a complete change of pace, walk across the hall to the Alice and Horace Chandler and North Galleries for Mary Reid Kelley’s superb installation and costume-​​based exhibition entitled “Mary Reid Kelley: Working Objects and Videos” 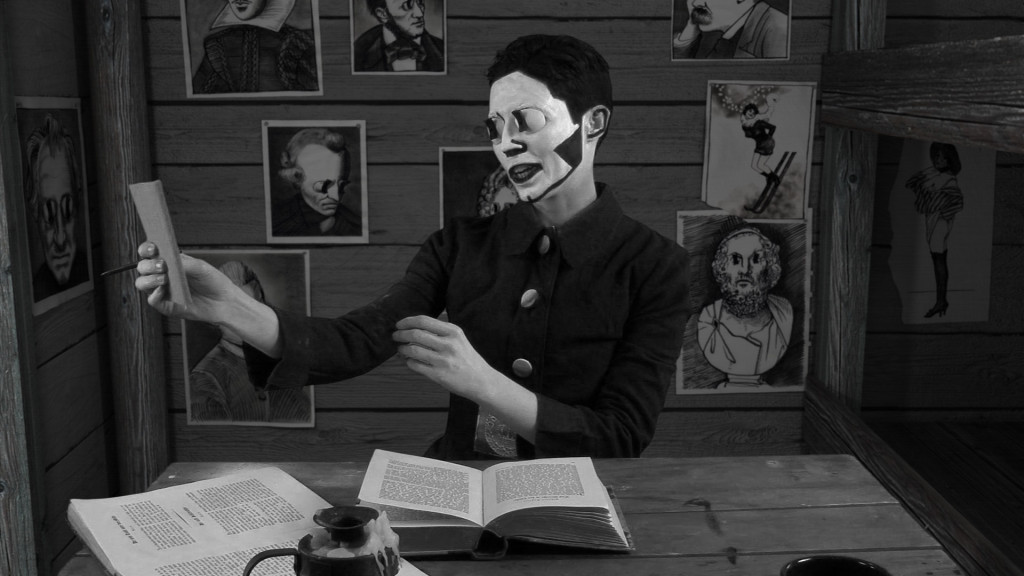 Mary Reid Kelley with Patrick Kelley — still from “You Make Me Iliad” — Courtesy of the artist and Fredericks and Freiser, New York

Reid Kelley’s visually rich and intellectually stimulating video art converses with history; the work fuses techniques of live performance and stop-​​motion animation, and creates poignant characters who declaim in droll verse, blending Homer and Cindy Sherman. It is the first museum exhibition devoted to the finely crafted and researched costumes, objects, and drawings that Reid Kelley creates, in collaboration with Patrick Kelley, for her videos. The exhibition is organized by Daniel Belasco, the Dorsky Museum’s curator of exhibitions and programs, and runs through April 13.

The Hudson Valley is so rich in artists and art making that, as always, we regret not being able to cover every event. We do, however, encourage our readers to explore and discover new artists and events in the Valley — perhaps in your own backyard.

The banner image at the top of the article is from the “Small Works” show at WAAM’s Founder’s Gallery by Kari Feuer, winner of the Sidney Laufman Award.   Images are courtesy of the artist or their representative.

For more information on anything in this article, please contact the galleries directly. All websites can be found by doing a basic search, and include phone number and e-​​mail options.